In the northern part of Hannover, the Gottfried Wilhelm Leibniz University, hosting the FJS 2022, is located with its department buildings spreading all across the district. Yet, the center of every student’s life is the Guelph Castle, which is the main building. The university is named after the German polymath Gottfried Wilhelm Leibniz. He was a mathematician, philosopher, scientist, and a diplomat and had great impact on natural science, linguistics and geology, as well as psychology, law and even computer science until long after his death. This is highlighted in the design of the university's logo honoring his contribution towards the binary number system.

Leibniz University Hannover is one of the biggest universities in Lower Saxony with 29,000 students from 119 countries. Approximately 3,100 researchers work in more than 150 institues with subjects ranging from engineering and natural sciences to architecture and environmental planning, from law and economics to social sciences and humanities. LUH is one of the nine leading insitutes of technology in Germany and leader of two clusters of excellence: PhoenixD and QuantumFrontiers. Additionally, it is a co-applicant of Hearing4all with Oldenburg University and cooperates with TU Braunschweig on the SE²A project. 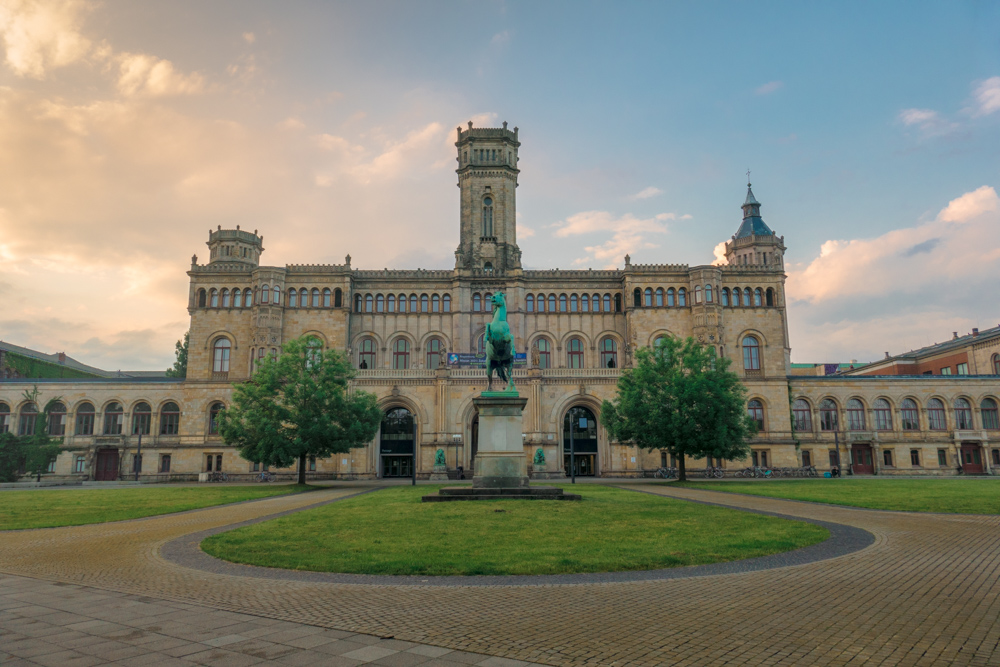 The chemistry department at LUH is subdivided into four institutes, all located on one campus. The Institute of Inorganic Chemistry (ACI) is located in a historic building that was opened in 1909 and is currently the oldest building in Germany that has been continuously used as a chemistry institute since its inauguration. Here you can find the Kali-Chemie-Hörsaal, the oldest lecture hall of the whole university. The working groups are mainly concerned with solid state and material chemistry as well as molecular chemistry and polymers. As part of the excellence clusters Hearing4all and PhoenixD researchers contribute their expertise in multidisciplinary projects.

The Institute of Organic Chemistry (OCI) is located right next to the ACI in a modern glass and steel building. In total nine research groups work here in the main building as well as the Centre of Biomolecular Drug Research (BMWZ) that can be found right down the street. The working groups focus primarily on organic synthesis, biological chemistry and structural biology. It aims to discover new active substances and elucidate their mechanisms of action. The main pillars of this research can be divided into the following categories: Organic synthesis, synthetic biology, medicinal chemistry, chemical biology and structural biology. Most of the research groups are involved in the BMWZ where they cooperate with different groups from the Hannover and Braunschweig areas.

The Institute of Physical Chemistry and Electrochemistry (PCI) conducts research in the areas of energy, nanostructured functional materials for energy conversion, development of functional nanomaterials from colloids, separation, complex interfaces and molecules, and heterogeneous surface catalysis.

At the Institute of Technical Chemistry (TCI) biotechnological research in many areas is carried out. This covers mammalian cell culture as well as tissue engineering, microbial cell culture and the cultivation of microalgae. Furthermore we are focusing on downstream processing and on the biotechnological characterisation of the targeted products, as well as developing and employing multiple sensoric means for monitoring and controlling the bioprocesses. Another focus is on microsystem engineering to downscale processes to a miniature size and on additive manufacturing of lab technologies. Further research is dedicated to photo catalysis, medical biotechnology, digitalisation of lab infrastructure and bioinformatics.